A Cure for Arthritis 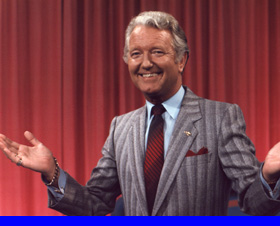 After 22 years of producing, writing and presenting ITV’s ‘Mr & Mrs’ Show, I never cease to wonder at and enjoy the ‘unconscious’ humor that comes from that very happy series. I remember one evening asking an elderly lady, which of these games her husband would play best – Snooker, Bowls or Darts. She said, immediately and to my slight embarrassment, “Oh, Derek, haven’t you noticed, he has arthritis very badly in his fingers and I don’t think he could play any of those games. If I have to choose one, perhaps he could just about throw a dart.”

Back came her husband from the ‘Music Box’ where he couldn’t hear her answers. I apologised to him for not noticing his problem, but said that his wife had given us an answer to the question and would he now tell me whether she said he would play Bowls, Darts or Snooker best. He thought for a while and then said, “Ee, lad, I don’t know that I could manage any of them, but, wait a minute, perhaps I could just about throw a dart.”

The audience roared and that answer won them £2,000. On came our lovely hostess with her silver tray on which was the £2,000 in fivers. His wife stepped forward and then it happened – I have never seen anyone’s fingers move so quickly. Before she could get near it, he scooped up the cash!! “Thank you very much lad, thank you very much,” he said. 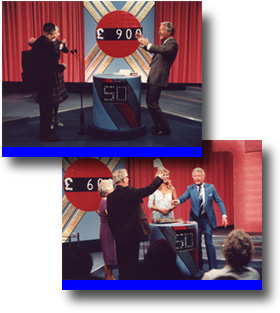 I thought – one thing I’ve done on this programme is to find a cure for arthritis – it’s called money!!

Seriously though, it’s a lovely series to be involved with. Every show depends on the humor and excitement generated by the couples themselves.

I asked a tough lad from Glasgow – 5 feet tall and built like a brick shed – “When you’re having a meal at home and there’s no-one else around, just you and your wife, do you always have serviettes, sometimes have serviettes, or never have serviettes? “He looked at me for about three minutes and then said slowly, “Do you mean boiled or fried?”

A competition for a
‘Mr & Mrs’ poem produced these short poems.

THE SUN SHONE ON OUR WEDDING DAY,

THE CHURCH BELLS RANG SO LOUD,

THE GOLDEN BAND WAS ON HER HAND,

AND I WAS FEELING PROUD

AND I’VE WORKED OUT AS I SPEAK,

IF I’D MURDERED HER, NOT MARRIED HER,

I’D BE COMING OUT NEXT WEEK.

WE’VE TRIED READING ALL YOUR BOOKS,

WE KNOW WHO DOES THE GARDEN,

AND WE KNOW WHO SEWS AND COOKS,

WE KNOW WHO HAS THE SWEATY FEET,

WE KNOW WHO READS IN BED.

THE ONLY THING THAT WE DON’T KNOW

IS WHY DID WE GET WED?

HE WON’T LISTEN WHEN I TALK TO HIM,

HE WON’T ANSWER WHEN I SPEAK,

HE DISAPPEARS WHEN MEALS ARE MADE

AND GOES DRINKING TWICE A WEEK.

AND DARTS MATCHES TO BE PLAYED,

IF MARRIAGES ARE MADE IN HEAVEN,

THEN WHERE ARE HUSBANDS MADE?

HE MUST HAVE FELT THE STRAIN,

‘COS HE GAVE THEM MANY WORKING PARTS,

BUT HE DIDN’T FIT A BRAIN!

This lady’s husband wrote this underneath:

AND WHEN THE LORD CREATED WIVES,

HE SEARCHED BOTH NORTH AND SOUTH,

TO FIND THEIR MOST ATTRACTIVE BITS,

THEN HE SPOILED IT WITH A MOUTH.

And here’s a poem I wrote and used in my stage shows. It’s set to the music of ‘Phil the Fluters’ Ball’, so you can not only recite it, but you can sing it as well!- All together now!

FOR MANY MANY YEARS NOW,
IN MY QUIZ ON MARRIED LIFE,
I’VE BEEN PUTTING LOTS OF QUESTIONS,
TO EACH HUSBAND AND EACH WIFE,
AND ALTHOUGH WE ALL ARE HOPING
THAT THEY’LL WIN THE LOVELY MONEY,
ISN’T IT AMAZING HOW THE
ANSWERS TURN OUT FUNNY? 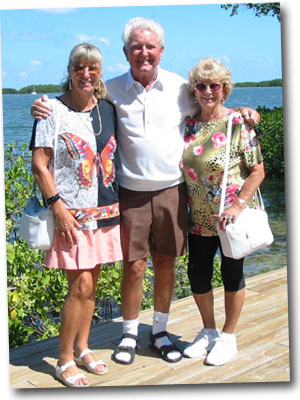 LIKE THE SCOTSMAN AND HIS MISSUS
WHO GAVE US QUITE A LAUGH,
WHEN THEY BOTH AGREED TO TELL US
THAT THEY DIDN’T HAVE A BATH .
HE’D WASH UP AS FAR AS POSSIBLE,
WHILE STANDING IN THE SINK,
BUT WHERE WE’D FIND HIS POSSIBLE,
WE DIDN’T DARE TO THINK!!

I ASKED A CHAP FROM IRELAND
IF ON HIS WEDDING NIGHT,
HIS LOVELY WIFE’S NEW NIGHTIE
WAS GREEN OR BLUE OR WHITE.
HE ANSWERED QUITE CORRECTLY,
THEN I MET HIS IRISH LASS,
WHO BLUSHED A LOVELY SHADE OF PINK
AND SHYLY ANSWERED – “PASS”.

A COUPLE MARRIED 50 YEARS,
FROM YORKSHIRE , JEAN AND JACK.
HE’D TAKEN OUT HIS DENTURES
AND FORGOT TO PUT THEM BACK.
HE SAID HE’D GET THEM FROM HIS POCKET,
AND THEN HE HIT A SNAG,
‘COS HIS WIFE WAS IN THE MUSIC BOX
AND HIS TEETH WERE IN HER BAG. 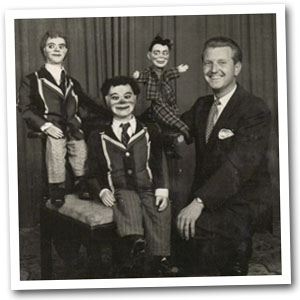 WE’VE HAD WELSH FOLK FROM PLACES
WE COULDN’T EVEN SAY,
WE ONCE HAD A MISTER KNIGHT
WHO MARRIED A MISS DAY.
WE’VE HAD LOTS AND LOTS OF LAUGHTER,
WE’VE EVEN HAD SOME TEARS,
AND A COUPLE WITH NINE CHILDREN
WHO’D BEEN MARRIED FOR THREE YEARS.

SO TAKE A LOOK AROUND YOU
THE PARTNER THAT YOU KNOW.
WOULD YOU GET ALL THE ANSWERS RIGHT,
IF YOU CAME ON THE SHOW?
WE’RE GOING TO PLAY THE GAME QUITE SOON,
AND WHAT I SAY IS TRUE,
WE’LL BE CHOOSING OUR THREE COUPLES
AND TODAY THEY COULD BE YOU.